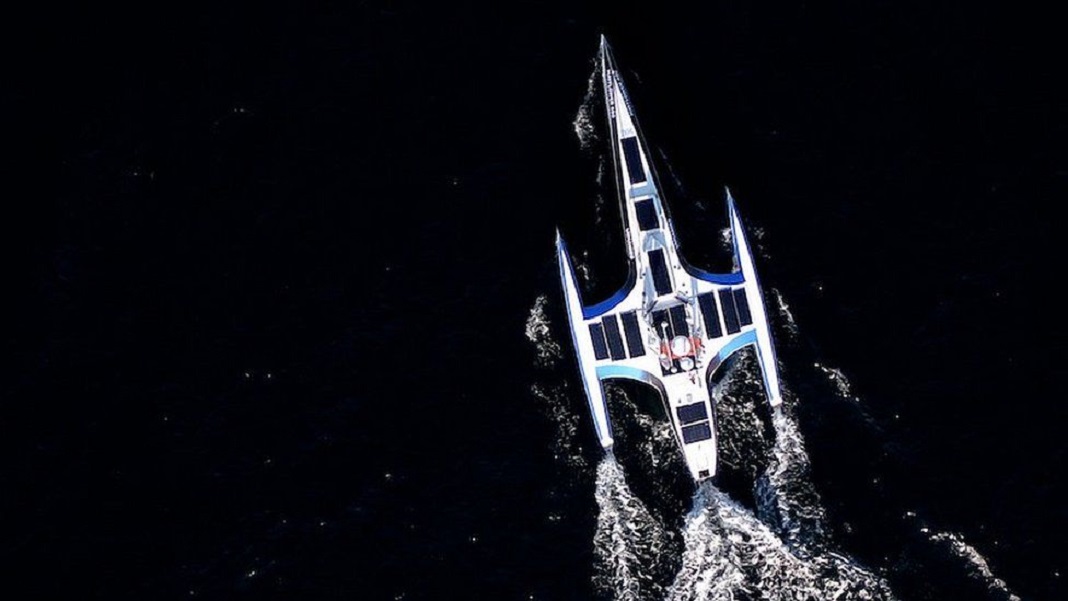 Just under 402 years ago, in August of 1620, the Mayflower set sail from Southampton, England, bound for America. The 100-foot-long-long, triple-masted wooden vessel with canvas sails took more than two months to cross the Atlantic. It carried 102 passengers, had a max speed of three knots an hour (that’s about 6 kilometers or 3.7 miles an hour) and required a crew of 30 to operate.

Earlier this month, another Mayflower crossed the Atlantic, but it couldn’t have been more different from its namesake in almost every way. The one similarity was that, well, it was also a boat.

The differences? The new Mayflower—logically dubbed the Mayflower 400—is a 50-foot-long trimaran (that’s a boat that has one main hull with a smaller hull attached on either side), can go up to 10 knots or 18.5 kilometers an hour, is powered by electric motors that run on solar energy (with diesel as a backup if needed), and required a crew of… zero.

That’s because the ship was navigated by an on-board AI. Like a self-driving car, the ship was tricked out with multiple cameras (6 of them) and sensors (45 of them) to feed the AI information about its surroundings and help it make wise navigation decisions, such as re-routing around spots with bad weather. There’s also onboard radar and GPS, as well as altitude and water-depth detectors.

The ship and its voyage were a collaboration between IBM and a marine research non-profit called ProMare. Engineers trained the Mayflower 400’s “AI Captain” on petabytes of data; according to an IBM overview about the ship, its decisions are based on if/then rules and machine learning models for pattern recognition, but also go beyond these standards. The algorithm “learns from the outcomes of its decisions, makes predictions about the future, manages risks, and refines its knowledge through experience.” It’s also able to integrate far more inputs in real time than a human is capable of.

The training included teaching the algorithm to identify objects in its path like cargo ships, fishing vessels, or shipping containers floating in the water.

For all its training and preparation, though, the Mayflower 400 ended up falling a bit short of its goal.

It set sail from Plymouth, England on April 29 and was meant to take three weeks to arrive in Washington, DC—but a mechanical issue ended up derailing it to the Canadian port of Halifax. Details weren’t specified, but it may have been something similar to what happened during the ship’s first attempted voyage in 2021, when a metal component on the backup generator fractured, and solar power alone wasn’t enough for the ship to complete its journey.

The Mayflower 400’s engineers will doubtless press on, though, and are likely already planning another voyage for the high-tech autonomous ship. Despite the snafus, it’s pretty amazing to contemplate how far technology has come since the original Mayflower crossed the Atlantic. Makes you wonder what a similar voyage will look like 400 years from now; from hydrogen-powered airships to civilian submarines to faster, sleeker AI-powered solar vessels, it seems anything is possible.